The mother of all protests converged by the labour union (NLC) seems to be gathering momentum as the students community from across boards have pulled their weight behind the planned protest.

The Niger Delta University students’ leadership under the Students’ Management Interface Committee (SMIC) has released an internal memo, calling on all students of the institution to rally around the protest to bring students back to school.

The memo which was released on Monday 21st July, 2022 and jointly signed by Opurum Queen, Edoghotu Victoria and Meye Favour; Ag. Chairperson, PRO and Secretary respectively stated in part: “sequel to the decision of the National Executive Council (NEC) of the Nigeria Labour Congress to engage in national days of protest, in support of the struggle of the Academic Staff Unions of Universities (ASUU) to revamp our public universities and return Nigerian students back to classroom, the Executive council of the Students Management Interface Committee (SMIC) is in full support, and calls on all students of our prestigious Niger Delta University to participate in the planned protests in their various State Capitals and the FCT.

The SMIC reminds all students to be law abiding even as they fight for better governance. 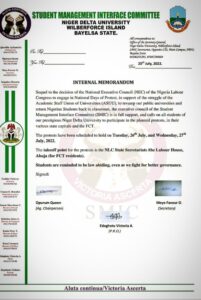