With the Niger Delta University School Fees Portal Closure protest resolved between the Bayelsa State Government State, the NDU management and the students’ community, several persons have been wondering what actually led to the protest. 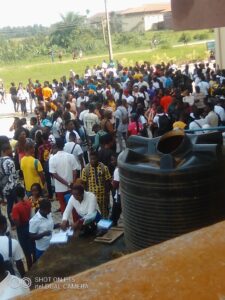 NDU Students gathered at Agric Faculty, Newsite, waiting for VC to address them: 07/07/2021

It was the turn of Engineering Faculty on the 6th of July, 2021 when the Vice Chancellor, along with Faculty members held a meeting at the Engineering building.

Let it be clarified that prior to this time – though there were pockets of plans to protest against general school policies especially unionism concerns – there was no established move for a protest.

The VC-Engineering meeting was adjudged to have gone on smoothly for quite a while before things went soured.

It is hard to say that the school fees portal closure actually led to the protest. It will also be difficult to say the perceived uniform imposition caused the protest. Further, it may not be correct to point to the overdue SUG ban as the major cause of the protest. Despite the fact that dust have gathered prior to this protest, there was however, no established plan to start a protest that day. 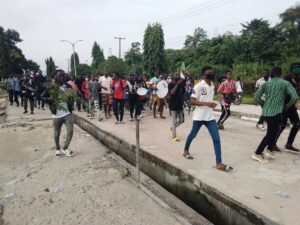 Our correspondents recalled that even from the morning of Tuesday 6th July, 2021 down till the beginning of the Engineering meeting with the VC from 10:00am-12:00pm, campus life in general was gentle and easy-going.

Meanwhile, the Vice Chancellor was billed to visit the Faculty of Education from 12:00pm-2:00pm and Faculty of Arts from 2:00pm-4:00pm.

Eyewitness reports including our correspondents confirmed that the VC’s statement must have added to the protest. The internet was already awash with posts agitating for a protest. However, it was cited that the VC, during the Engineering meeting with management stated that even if heaven fall, the school fees payment portal will not be reopened.

This statement has been the only statement all students investigated have been holding on to. It was asserted that many students felt dejected hearing the many statements being uttered by the VC. The VC was said to have quoted the university law that all students in upper years who are yet to pay up their 100 level and 200 level fees should go back to the last level they paid their fees. 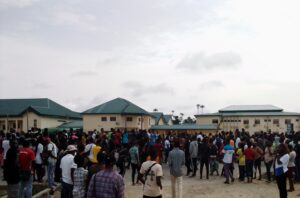 The VC was also quoted as follows: “There is no going back on the decision of the University’s senate decision on every student of the University to wear uniform and the closure of the school fee portal.” Meanwhile, when the VC was making these statements, he was unaware of the level of dust gathering on campus in addition to ongoing agitations and plans to undo management’s policies.

The Engineering-Management meeting met with rowdiness as the VC’s statement often cause attacking statements from the students. The students would shout “to hell with your senate decision. We are not going to wear uniforms because we are not secondary school students!” The students in the Engineering hall also shouted “we are outrightly against every decision of the Senate.” The VC further infuriated the students when he said “you people don’ t have respect.” This caused the students to flare up in anger, became rowdy and the VC left in anger.

Details of the Protest Procession 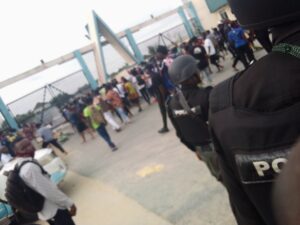 Following the fallout of the meeting that ended in comatose, a protest procession ensued by the students of the Faculty of Engineering in collaboration with the general students’ community. They came out of the Hall already charged with burning anger, they matched forward singing “we no go gree” with a clap of hands. As they demand immediate reversal of the decision of the Senate.

The Demands of the Students Protesters

The students made several demands from management ranging from school fees issues to uniforms. In specific terms, the demands are;

The protesters were joined by other Faculty students and proceeded to New Site singing their protest songs. As soon as they got to New Site, some of the protesting students went into various lecture halls and lecture theatres to chase out lecturers and students who were receiving lectures in order to ensure that no lecture holds while other protesters headed towards the Senate Building in the University.

Later in the morning-early noon of Tuesday 6th July, 2021, the protesting students were seen on campus carrying placards with various descriptions; like “VC is a Yahoo Boy”, “VC must go!” ” No More Lectures!”.

Moving from Main Campus to New Site and outside the Main Gate, the students gathered at the Main Campus University to address themselves without a leader insisting never to give up until all their demands are attended to by the VC.

Posters in support of the NDU 2021 protest

Meanwhile, stakeholders in Amassoma, Yenagoa and across boards have joined the students in appealing to the NDU management in opening the portal so that students can pay their fees. Also, parents, sponsors and guardians were not left out as pressure kept on mounting on management.

Posters in support of the NDU 2021 protest

The protest continued till 7th July, 2021 and this forced management to abruptly and indefinitely closed academic activities which would open later July 12th, 2021. 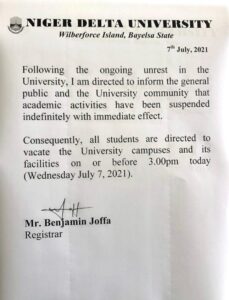 A bulletin was released to this effect from the Registrars’ Office on Wednesday 7th of July 2021 stating that all academic activities were to be suspended and that all students should vacate the University Campuses and its Facilities on or before 3pm on Wednesday.

By this directive, the students in the hostels were forced to vacate their hostel rooms before 3pm. The protest by the students was still on in Main Campus gate with playing of music to accompany the protest.

In an interview with some students by A & U Ng correspondent, students narrated their displeasure with the University Management because of the agony they have to go through in the payment of their fees. Some students said, “we are not happy with the school management because they billing us too much with all kinds fee payment”. Some others said “we don’t like the idea of school uniforms”.

The Role of the Students Management Committee (SMC)

Meanwhile, the Students Management Committee (SMC), a government committee set up to oversee students’ activities in the state have met with the agitating students along with the SA to the governor on special matters to calm the students and to promise them that their demands will be met. 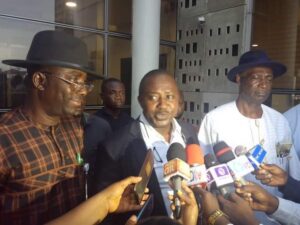 By Thursday July 8th, 2021, the government and the management in the presence of the students’ reps held a meeting in Yenagoa to resolve all issues causing the protest. The meeting was concluded with the following resolutions: 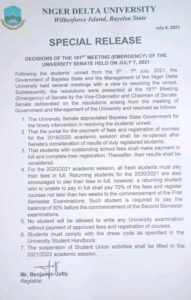 By Friday July 9th, 2021 the school management in an emergency Senate meeting opened up the school fees portal along with the following resolutions:

Throughout the protest by the students, no life was lost neither any property of university was destroyed by the protesters. It was indeed a peaceful protest all through though with a high spirit agitation. 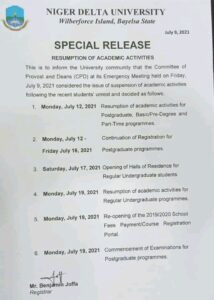