Unbanning NDU Students’ Unions: A Furthered Way to Keep the Peace and Tranquillity Every administration operates at its own pace which is consequent upon the level of understanding of the administrators therein. The incumbent NDU management have been widely acclaimed to be effective, full of foresight, flexibility and perspicacity. This is not just by sheer dint of sycophancy but in managerial deeds as can be independently observed.

To say an administrator have foresight, it means he looks ahead, foresee what is likely to happen in the future and make policies thereupon today. It is very clear that the NDU management have the needed foresight when it attempted the concurrent/constricted semester. Today – a year later, the whole academic world now need the same policy if they must meet up with lost time.

To say the management is flexible, let us use the following occurrences to expatiate. In early 2016, there was a great riot in NDU now popularly referred to as the MPC riot. The riot was as a result of a little disparity between management policy on the MPC Law and students demand. The then management under Prof. Humphrey Ogoni refused vehemently to hacken to the demands of the younger students. This led to the MPC riot of 2016 which resulted in destruction of properties. Today, that policy has been partially abolished as students, not only in Engineering but also in Nursing and related fields can now resit for the courses they failed. Those who followed this story will commend the incumbent NDU management for this policy to resit owing to the previous chaos and loss it caused the university.

By Sheer Dint of Observation

Talking about perspicacity and administrative taste, we may drift away from the purpose of this material if we should go into this. But the new multipurpose halls, the auditorium, new lanes, senate building, the environment in totality and many more are testament that the current administration has great taste for educational facilities.

Developmental Strides in the Niger Delta University: An Inbound and Outbound Approach

“following the unruly behaviour of students on campus and the subsequent suspension of academic activities, Senate at its 155th meeting held on Thursday, April 26th, 2018 pronounced the suspension of all students union activities, associations at both departmental and faculty levels in the university till further notice. Defaulters would be sanctioned”. 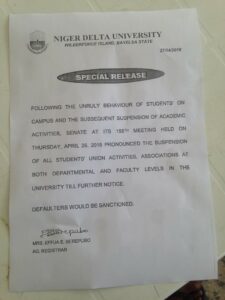 Little did we know that the further notice is going to take another three years.

Let us agree that the students’ union ban was a child of necessity which has contributed to the peace and tranquillity of the NDU which is an asset to any academic community. Let us also agree that the ban brought everyone back to their senses and academic needs were fulfilled to the maximum in the recent past.

However, the need for the ban has been long outlived. The VC had earlier in June 19th, 2019 when the students’ body awarded him for his performance and begged him to unban students’ unionism, put forth valid arguments why the ban must continue. The VC inter alia stated that due to the Bayelsa gubernatorial elections, the ban will still continue to avoid political apparatus hijacking the students’ leadership for the elections. The VC also added that the ban will continue to ensure he balance the academic calendar which has been delayed because of months of strikes, riots, flood, etc. The above arguments, though valid then, have now expired as both yardstick – the elections have come and gone and the NDU academic calendar have been updated before the pandemic. At this ungodly hour in the ban of students’ unionism in NDU, the management would have to come out with new superior arguments why it has refused the students their privilege. This is because as an academic community replete with intellectuals, it is only superiority of arguments and acts that we will bow to and not tyranny. If the NDU management have no further reasonable argument to continue in this ban, then it has no more hold on the students – the ban should be lifted.

What is actually playing? The students have given management the needed peace they desire. Despite the school fees oppression which everyone now desires to put behind them, the student community have decided to swallow all that have happened and manage things as they are. What else does management is actually looking for in this ban issue? The elections have come and gone and the calendar has been updated. What else is currently holding students’ unionism in NDU?

Let us state the fact clearly and rebuff any argument that for the peace and tranquillity in NDU to continue, the ban must go on. This is because the peace came as a result of the understanding that if the ban must be lifted, there has to be peace first, hence the peace in the community. 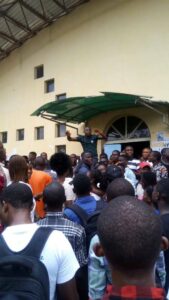 Some stakeholders however, held the view that the management have continued to hold on to the ban because it does not want students to oppose any of its future policies. If this is anything to go by, then an imminent riot is inevitable as the students’ community have been working behind closed doors to ensure the ban is lifted even if it comes against the will of management.

I feel the need to write this piece because I can see that the NDU management will use this continuous ban to tear down all it has laboured for in the last 3 years. Dust is gathering under its feet but it is least unaware. The students’ community have given them the needed peace – they must reciprocate and give students their unions back without terms, conditions nor further delay. Power is transient and so, we must use it to favour humanity.

We should not forget the lovely Chris Ikporikpo was once the most loved VC of the great NDU. Today, we hardly hear his name. This is a fine corroboration of the fact that power is absolutely transient. We become nothing the day we leave office if we use our powers wrongly.

As we speak, the NDU student unions have exhausted the 3 Cs of aluta. They have consulted, they have consolidated; they have even gone ahead to placate the management, they have also awarded the management for efficient service. All possible channels to entreat management on the need to unban students’ unionism in NDU fell on deaf ears. Now, the students may have no choice than to attend to the last C of aluta, and that is confrontation. Let us not be blinded by encomiums, pride and self-deceit if that is the case especially as held in some quarters. Let us not use our own hand to bring down what we have built in the last 3 years. Let us listen to the sound of superior arguments and unban the students’ unions to give space for continued peace and tranquillity that have pervaded the air of the NDU space.

As some stakeholders belief, those around management do not tell management the truth. They only pour encomiums and these encomiums have overwhelm management. But while we are enjoying our encomiums and pushing the students’ request away, let us understand that we are pushing them into the hands of scheming, plotting and agitations. I have received 7 different discussions from students in a week and I have no other choice than to write as a way to wake management up from this slumber in the ban issue.

Let it not be that the decision to unban NDU students union will be imposed on management from a superior authority and the encomium will be redirected to whom it is due rather than within the university.

The weather is pregnant! Do not allow it to burst into rainstorms. Unban NDU students’ unions now!