There is a resumption memo currently being circulated in some session of the media announcing that the NDU is resuming Tuesday 22nd September, 2020. 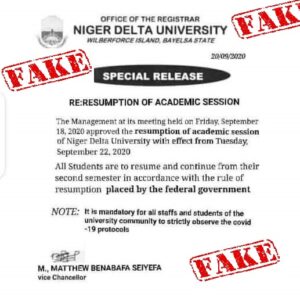 The memo which came into circulation on Saturday 19th September stated amongst others that “the management at its meeting held on Friday September 18th, 2020 approved the resumption of academic session of Niger Delta University with effect from Tuesday, September 22, 2020”

The memo also added that “all students are to resume and continue with their second semester in accordance with the rule of resumption placed by the federal government”.

However, in our bid to confirm the authenticity of the memo, we placed a call to the University PRO Mr. Ingezi Idoni, who stated clearly that the University has no released any resumption memo.

In furtherance or our verification, we also discovered that the signatory is the Vice Chancellor with a different name M., Matthew Benabafa Seiyefa, while the current VC is Prof. Samuel Gowon Edoumiekumo.

In addition, the letters of the memo also appeared to be edited by a roadside operator and does not in anyway reflect original text from management.

The date on the memo also carried today Sunday 20th September, 2020. Meanwhile, it is almost not possible that a memo will be released on a Sunday. By who?

In totality, it was confirmed that the memo was nothing to go by but fake. It will be in the best interest of students to disregard the said memo.

When Will NDU Resume?

For now there is no particular date as to when the Niger Delta University will resume. The University management have not given any hint on the resumption date even as many other Universities in Nigeria has given a date for their resumption.

It is hoped that management will announce a date any moment from now. Until then, we keep our anticipation high as we are poised to bring to you the latest news in NDU.

Meanwhile, Post UTME examination date is also yet to be released. It is exprected that management will announce the date when things are right