Anunkankampi will continue in his sexscapade in his subsumed grave: UNN Alumni tweeted

“The evil that men do lives after them” is a popular African proverb which has proven to be true with a UNN lecturer, Darlington Okoye (Ph.D) popularly known as ‘anunkankampi’. Darlington was called out by graduates of UNN (University of Nigeria, Nsukka) after his death for being a serial and unrepentant sex/cash for grades lecturer who carried out his sexual escapades with a high level impunity according to his victims. 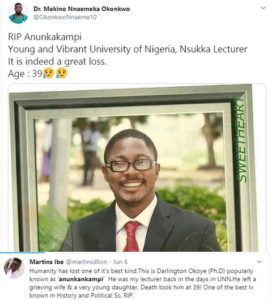 Many UNN graduates lamented that his sexcapades was equal to none as he does it with so much impunity.

Dr. Mekino Nnaemeka Okonkwo had taken to his Twitter handle @OkonkwoNnaeme10 to announce/mourn the death of his colleague when he tweeted:

It is indeed a great loss

Unfortunately, while some sympathetic students opined that humanity has lost a lecturer of its kind, other students has taken a different view of who the lecturer was. 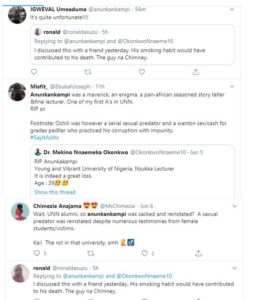 It seems not all the students were happy with the man while alive as many alumni members who were familiar with the lecturer threw trolls at the tweets.

Some graduates tweeted that Darlington was a ‘chimney’, meaning he smokes too much and suggesting the smoking would have added to his death.

Others however, commented on his sex for grades lifestyle which he does with impunity. Misfit tweeted that “Ochili was however, a serial sexual predator and a wantom sex/cash for grades pedller who practiced his corruption with impunity #SayItAsItIs”. 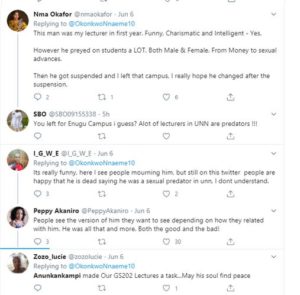 Chimezie Anajama tweeted: Wait. UNN alumni, so anunkankampi was sacked and reinstated? A sexual predator was reinstated despite numerous testimonies from female students/victims? Kai! The rot in that university, smh”.

Nma Okafor tweeted: “This man was my lecturer in first year. Funny, Charismatic and intelligent – Yes. However, he preyed on students a lot. Both male and female. From money to sexual advances. Then he got suspended and I left the campus. I really hoped he changed after the suspension.

To make matters worse, Austin Nwabufo tweeted: This anunkankampi will continue in his sexscapade in his subsumed grave, everything with a beginning must have and end”. 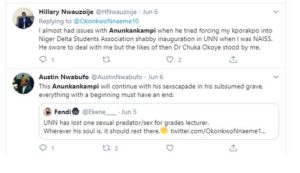 These are some of the issues we always write on which are going on in many universities. The situation in the Universities is getting worse by the day. Sometimes, when students finds themselves in this situation, they have no one to run to since the one you report to may be a crony who may later report you. These things are not interesting at all.