While the ongoing deadly coronavirus disease might sound strange and new to many, including even health care providers and experts, Jehovah’s Witnesses had actually sounded a warning of its emergence 15 years ago, in one of its magazines, Awake! 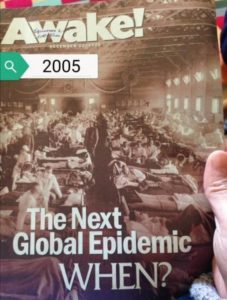 A December 22, 2005 issue of Awake! magazine, the official publication of the Jehovah’s Witness, published by the Watchtower Bible and Tract Society, published an article titled “The Next Global Epidemic, WHEN?”, which traced a number of flu bugs that had hit the world previously and what was likely to happen in future.

The magazine recalled the flu virus of 1918 and 1919 which turned into a pneumonia-causing killer of both young and old people.

Writing on the subject “The Next Global Epidemic, WHEN?”, the December 22, 2005 edition of Awake! did not only raise the alarm that a pandemic virus might emerge in China or a nearby country, but it also warned that it might emanate from an animal and could surface from antigens or virulence factors derived from animal influenza viruses.

The magazine quoted the medical journal, Vaccine, of 2003, which warned: “It has been 35 years since the last influenza pandemic, and the longest interval between pandemics recorded with certainty in 39 years. The pandemic virus may emerge in China or a nearby country and could surface from antigens or virulence factors derived from animal influenza viruses. 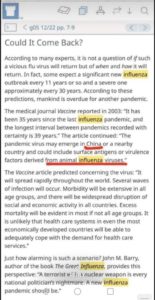 “It will spread rapidly throughout the world. Several waves of infection will occur. Morbidity will be extensive in all age groups, and there will be widespread disruption of social and economic activity in all countries. Excess mortality will be evident in most, if not all age groups. It is unlikely that health care systems in even the most economically developed countries will be able to adequately cope with the demand for health care services.”

True to this prediction, the influenza pandemic began in China, from where it has spread to other parts of the world. And according to the warning, even with its huge economic base, China has not been able to cope adequately with the sensor health care services.

For instance, it was reliability gathered that price of common nose mask made in Nigeria has trippled in recent times, from N500 per pack to N1500, due to the hot demand for it from China. And as at late March, 2020 it has reached a whooping sum of N20,000 per pack in some quarters.

The issue of Awake! warned of the seriousness of an outbreak of an Influenza-like Corona Virus, when it quoted John M. Barry, author of the book, The Great Influenza, who said: “A terrorist with a nuclear weapon is every national politician’s nightmare. A new influenza pandemic should be.”

Perhaps the whole world would not have been in this precarious situation it finds itself now, if governments, medical experts, health care providers and bodies like the World Health Organization, WHO had taken seriously the warning sounded by the Awake! magazine and took proactive steps to nip it in the bud. 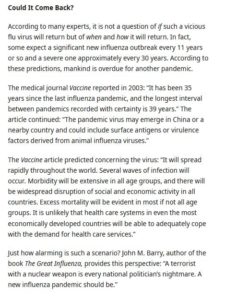 The Jehovah’s Witnesses might not be as popular and loved by many, as they have received a lot of backlash from individuals and other religious organizations due to their doctrines, but certainly, they deserve respect for their zeal in their worldwide preaching and Bible educational work.

Numbering over 8,683,117 in over 240 lands, Jehovah’s Witnesses have always warned of the of pestilences and deadly plagues, as prophesied by Jesus Christ, using Luke 21:11 and Revelation 6:8 as references.