A group of boys suspected to be cultists had yesterday clashed with what eyewitnesses said to be community boys. The clash was said to have occurred in the popular Infinity night club from where it extended to Efeke-Ama section of the Amassoma Community.

The clash which originally affected two cult groups extended to the community boys which purportedly resulted in the death of one person. The community has decided to fish out the boys involved in the act and hand them over to the Police for proper investigation. 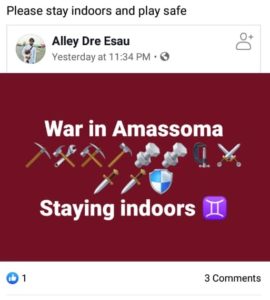 A call placed to the Vigilante boss in Amassoma revealed that a cult group known as Greenlanders unsuccessfully attacked an Icelander, who later went on reinforcement for a reprisal attack. The Vigilante boss however, noted that only one person died as against the report that two died.

“Amassoma is safe and no one is running anywhere” the Vigilante boss added noting that the security outfit are on ground to ensure that boys involved are fished out and punished for the crime committed.