The Niger Delta University has released the acceptance fees charges for freshmen for the 2019/2020 academic session as resumption date draws closer. According to the new school fees bulletin released today 23rd October, 2019, the new acceptance fees witnessed an increment of N10,000 only. This implies that acceptance fees for year one which hitherto was N30,000 is now N40,000.

In all of the above, there is an indication that the N10,000 increment cuts across all the 100 and DE students acceptance fees.

Nevertheless, there is no bulletin currently as to when the actual clearance will commence. Hopefully, haven released acceptance fee charges, it is expected that clearance will commence any moment as from 24th upward. This speculation is solely personal and based on the release of the acceptance charges. Acceptance charges are often released together with clearance commencement dates. But since this current bulletin did not contain clearance commencement date, it is expected that clearance should be imminent. Calls placed to the PRO of the university so as to elicit the clearance date did not go through. 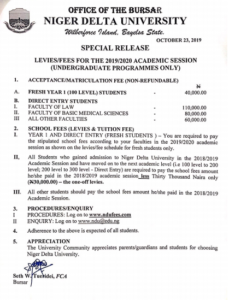 How Many Batches has Niger Delta University (NDU) Released?

We are repeating this issue because many requests has been made with some suggesting that the NDU has concluded its admission list. As at the time of this report, the Niger Delta University has not admitted even half a candidate. Only jamb list has been released and any who claimed he/she has been admitted in NDU must be referring to Jamb admission. However, anyone reading this publication as from 24th October, must refer to current publications as the NDU is pregnant with lists of admissions. It may even be possible that owing to current happenings, lists may even be released anytime after making this publication.