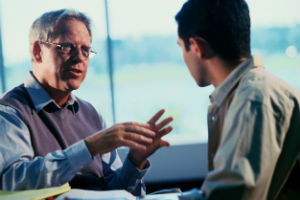 Abstract
As a research oriented environment, academic communities around the world are coming up with techniques in various practices that supersedes previous paradigms. Before now, supervision of research reports was mainly carried out manually, a situation that saw students printing their reports and submitting to their supervisors for corrections. Upon correcting such report, the researcher is expected to effect the alterations and additions and to reprint. This system of manual correction of research material have a significant effect on the researcher, making them to spend more, stress more and it is also highly monotonous. Therefore, this paper on “a shifting paradigm in modern research supervision” tends to portray best practices in research supervision with the aim of reducing all expenses and stress on the part of the researcher. The paper looked at over dependence on traditional supervision, Supervisory methods, sex for supervision and extortion. Based on the position presented on the above issues, necessary recommendations were made.

This paper portrays patterns of research supervision in a typical academic community, especially with the Niger Delta University in mind. Over the years, the author had discovered that despite improving standards in research practice across the globe, despite changing paradigms across boards, most supervisors have not adapted to what is obtainable in the global space. The traditional supervisory approach in supervision of undergraduate and postgraduate work still entangles virtually all researchers except a selected few.

The author is of the view however, that it would have followed that just as research is dynamic and emerging, so also, research practice in the local environment would have evolved to suit the current researchers and most importantly, the need of the immediate environment. Today, supervisors tend to be adamant and rigid to their supervisees. Despite bearing the name ‘supervisors’, they tend to be supervisors only by name and not in deed. Respect and dignity of the researcher/supervisee is nothing to the supervisor. In his earlier paper, Michael (2018a) maintained that when educators see students as a customer, they tend to put all necessary provision in place to ensure that they succeed. Unfortunately, because students are not put in their pride of place, they are wrongly supervised. Accordingly, instead of beckoning on their supervisors, students beckon on the assistance of research assistants.

The major aim of this paper therefore, is to pry into the supervisory skills and techniques of supervisors in the local academic environment in the Niger Delta University and to express an opinion on what is obtained. This position has been formed over the years as the author has been a researcher, research assistant, vocational business educator and a student for more than a decade in the local system. It is the author’s belief that with the recommendations so put forth, supervisory skills of researchers in the local community will be improve upon.

Over Dependence on Traditional Supervision

The practice of using print reports in research supervision is now being phased out/outdated. Contemporary supervisors now use digital means to receive, access, edit, and forward copies of corrected research report. This is to say, instead of allowing a supervisee to complete a research report and print it manually for submission to the supervisor, such supervisor do well to ask for soft copy through email and/or WhatsApp. However, email reception is preferable here because files received through WhatsApp could be lost when a phone is formatted.

Receiving research report through digital means is by far more preferable than printed reports. Think of the cost and stress it brings on the supervisee. For the supervisor, he/she have to flip through pages over and over again. It is possible to pass through erroneous words or sentences without noticing. But in a digital process, the Microsoft word application can easily highlight incorrect words and sentences. When using digital supervision, supervisors can in such instance effect the correction without having to manually write on the print report. All such supervisors do is to make a comment on the section so corrected (details on how to make comments are contained in the recommendation section). Traditional/print supervision can be so tedious, time consuming, costly and laborious. But with digital supervision, the students feel a sigh of relief. This is because when compared to manual supervision, students have a lot of advantages in the whole process. They do not need to go to the supervisor’s office, waiting for their turns to be attended to. They do not need to go the supervisor’s home as it were in some cases to get their files back to continue their report. When supervisors accept soft/digital supervision, everything can be done from phone to phone. For the students, they no longer have to battle with unclear supervisor’s handwriting. Observatory analysis indicates that researchers whose supervisors accept soft copies of their report for correction completes their report faster than those who use manual print supervision. The analysis also revealed that supervisors who use digital supervisory systems are more ICT compliant than manual supervisors.

I could recall a supervisor whose handwriting is extremely difficult to discern. Students have to battle with his excessive corrections and unclear writings. To some students, having him as a supervisor is a hell of experience. But where such supervisors accept online reception of supervisee research reports, all such unclear writings would be in soft form, well typed and the problem of unclear handwriting surmounted. In fact, most supervisors would even want to effect all the corrections where the research is well documented so that the report can go to the next step. This will even make it easier for both the educator and researcher. 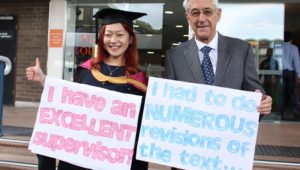 Supervisory methods of educators also posed problems for research students. This is because nearly all supervisors have their separate format and method of supervision slightly different from the general Faculty format. To this end, students’ reports are regularly changed or cancelled during defence. There was a report the author assisted where the supervisor demanded discussion of findings to be taken to chapter five from chapter four (where most format demanded). After such change against the format, during defence, the student was asked to take the discussion of findings to its rightful place in chapter four where it was before (Michael 2018b).

There was also another instance where the supervisor corrected an intext citation at the end of a quote from e.g. (Awokeni, 2018) to Awokeni (2018). How can the student who already knew that the supervisor was wrong tell the supervisor that this is wrong? Of course the author advised the student to effect the error from the supervisor with the belief that during defence, the panel will see it and change it back. Of course, the student defended and the error was seen and corrected. The problems here are the errors and discrepancies in supervisory techniques of research supervisors. It has caused students additional time, money and mental, emotional and bodily stress (Michael 2018b).

The author had witnessed numerous instances where supervisors will guide a report in a particular direction, but during defence, cancellation would be done not as a result of the student’s inability to prepare a good write up, but as a result of poor supervisory technique on the part of the supervisor. In fact, only recently, a work was cancelled during the proposal defence in one of the Departments because the topic is not a Faculty related topic. Of course the author had already forewarned the student that the topic was not related to her area of study and that the topic would be changed during panel. Unfortunately, in this environment, it is difficult to tell a supervisor who already approved a topic that the topic is not related. This is because they see themselves as all knowing and such confrontation would bring issues between both supervisor and supervisee. So, my advice was “go ahead”. So, when the topic was changed during defence by the defence panel, the student approached the supervisor, the supervisor said “why was she not informed that topics not related to the Faculty are not accepted?” My question to the student was “is the supervisor a new lecturer in the Department?” Over the years, the first step in research reporting is to identify a course related problem. How then is this supervisor not aware that such identified problem is not related? These are issues that the Faculty and Department administrative heads should be aware of, that poor supervisory skills have significantly influenced research reporting in the various Departments. There is a significant disparity between the supervisory techniques of supervisors. This disparity in supervisory style has caused students more financial resources as each cancellation has to do with reprinting of same work over and over again. Pity should be extended on the suffering supervisees.

It is disturbing to see cases of supervisors who demand for sex from their supervisees before they can get a nice research experience. Contemporary supervisors should understand that this act (sex for supervision) is highly being frowned at around the international community. Sex for supervision is no longer an act to be identify with. Educators should see their supervisees as customers who ought to be treated with utmost care and dignity and the only concern there should be to supervise to attain better research knowledge. A most painful aspect of the story is that even professors who have attained the acme of the academic ladder are grossly involved in the act. I could recall that a doctor used the word ‘indiscriminate’ in referring to a professor who sleep around with his supervisees. This is very disturbing to say the least. These are issues that academic management all around the world should frown at, putting all measures in place to forestall such acts in their environment.

As if sex for supervision was not enough, extorting supervisees all in the name of supervision has become a rampant issue in academic communities in Nigeria. Supervisors now see it as a right to be paid for supervising. But if it is true that supervisors should be paid for supervising, then, management should have made it statutory. But the argument that supervisors should be paid have been trashed out since we have educators who frown at such sort of extortion. True, out of hardwork, a supervisee can present a token to a supervisor. That is understandable especially when such supervisee does that from voluntarily. However, once it is forced, it is then an act of extortion. We have seen cases of supervisors who collect up to a whooping tune of 50,000 Nigerian Naira just for supervision. We also have cases of supervisors who require their supervisees to contribute to buy flat screen LCDs, Refrigerators and other electrical appliances. Some of these supervisees who are unable to meet up see hell in the hands of the supervisors. Their works are cancelled over and over again. Some even have their topics changed, just to drive home their point that no payment, no peace of mind. The supervisee has been largely victimized. This is why research students always look like a shadow of themselves because of extreme stress they undergo during their research report period.

The problems so listed above have unimaginable effect on the students’ community. Some of these effects are as follows:

Based on the problems discussed above, the following recommendations are put forth. 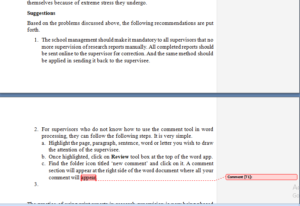 Michael, O. J. (2018a). The student as a customer. Retrieved January, 2019 from http://admissionsandutme.com
Michael, O. J. (2018b). Recommendations on best practices in research: A critique of the faculty of education research format. Retrieved January, 2019 from http://admissionsandutme.com/2018/02/10/recommendations-on-best-practices-in-research-a-critique-of-the-faculty-of-education-research-format/